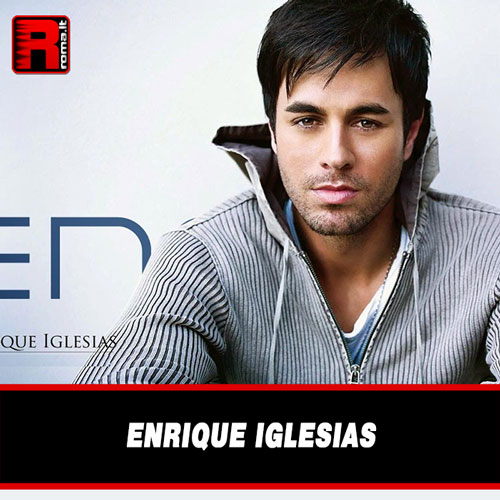 Who is Enrique Iglesias?

Enrique Miguel Iglesias Preysler was born in Madrid on May 8, 1975, the third and last child of the famous Spanish singer Julio Iglesias and Filipino journalist and model Isabel Preysler.

After the separation of his parents in 1978, Enrique lived together with his older brothers with their mother in Madrid, but on 30 December 1981 his grandfather, Dr. Julio Iglesias Puga, was kidnapped by the terrorist group ETA and for his own safety, Enrique and his brothers were sent to live with their mother in Belgrade, Serbia, for a year and then by their father in Miami.

Here, Enrique spent his childhood at the home of his grandmother Elvira Olivares, to whom the singer dedicated his first studio album, then spent the summers with his mother in Spain.

Enrique studied from the age of 18 at the prestigious Gulliver School, before enrolling at the University of Miami in business administration. Iglesias initially did not want to let his father know his intention to pursue a career as a singer, nor did he want his surname to help him.

After borrowing some money from the housekeeper and recording a demo, he managed to get a contract with the Mexican label Fonovisa Records, posing as a singer from Guatemala named Enrique Martínez. After leaving university, he flew to Toronto to record his debut album.

Second Part of the biography of Enrique Iglesias

Son of the well-known singer Julio Iglesias, he began his singing career in the first half of the nineties thanks to the Mexican record label Fonovisa Records under the name Enrique Martínez, before changing his stage name to Enrique Iglesias.

Since the early 2000s he has established himself as one of the most successful artists of Latin America and the Spanish market in the United States of America, thanks above all to a recording agreement signed in 2001 with the Universal Music Group for albums in Spanish and with Interscope Records for those in English.

In 2010, however, Iglesias decided to sign a third contract with Republic Records, in order to release bilingual albums, while in 2015 he left Universal to rely on Sony Music, under which he would release albums in Spanish and albums in English through RCA Records.

Over the course of his career he has sold around 180 million records worldwide making him one of the best-selling Spanish artists ever [citation needed]. Iglesias managed to include over 150 songs on the Billboard Hot 100, including 5 in the Top 10 and two at number one in the United States; He also holds records for the most singles topped the Top Latin Songs and Billboard's Hot Dance Club Play.

On July 12, 1995, the singer released his first studio album, Enrique Iglesias, a collection of melodic rock ballads, including hits such as Si tú te vas and Experiencia medica. The record sold over 1,500,000 copies worldwide, a good result for a Spanish language album. [Citation needed] The song Por amarte was included in the telenovela Marisol, changing the lyrics to make it into the show's theme song. A Portuguese and an Italian version of the album were released, whose singles achieved good results in the Latin American music charts, winning Iglesias his first Grammy Award for Best Latin American Artist.

The album contains the reinterpretation of Yazoo's Only You, entitled Solo en tí, sung in Spanish.

After this success, Iglesias embarked on his first summer tour, with Elton John, Bruce Springsteen and Billy Joel, reaching sixteen states. Starting in Odessa (Texas), the tour ended with three stops in Mexico City, and with two evenings at the Estadio River Plate in Argentina.

Vivir's three singles, Enamorado por primera vez, Solo en tí and Miente, reached the top of the Latin American charts, as well as of many Spanish-speaking nations. Iglesias received a nomination at the American Music Awards, which for the first time had a Favorite Latin Artist category. The prize went to his father. [Citation needed]

Matured, he reached the heights again with the single Esperanza and Nunca te olvidaré. He did a short tour, with a Mexican live broadcast from Acapulco, followed by another longer tour with over 80 shows. The Cosas del amor Tour was the first concert sponsored by McDonald's.

He won the American Music Award in the Favorite Latin Artist category, overtaking Ricky Martin and Los Tigres del Norte. The song Nunca te olvidaré was used as the theme song for a Spanish soap opera of the same title.

In 1999, Iglesias began to contaminate his style with the American one, to reach a wider market. This operation, already carried out by Ricky Martin and Jennifer Lopez, had launched the genre with great success. Iglesias contributed to the soundtrack of Wild Wild West (film with Will Smith) with the song Bailamos obtaining the first place in the singles chart.

On the wave of success he signed a rich contract with Interscope Records, recording his first CD entirely in English Enrique. It contained a duet with Whitney Houston (Could I Have this Kiss Forever) and a Bruce Springsteen reinterpretation, Sad Eyes. The single "Be with You" also reached # 1. [Citation needed]

A third single was released in several versions, with various locally renowned singers in Russia, Brazil and Asia.

Escape Launched in 2001, it surpassed previous albums in sales. Hero became the No.1 single in the UK.

Escape was his biggest commercial success to date even surpassing Michael Jackson's album Invincible, while the singles Escape and Don't Turn Off the Lights remained stable for a long time in the North American charts.

A special edition was made with the song Maybe, and a duet with Lionel Richie entitled To Love a Woman.

Iglesias highlighted his success with the "One-Night Stand World Tour", 50 sold out concerts in 16 states, including an evening at Radio City Music Hall and three at London's Royal Albert Hall, concluded with a great show at Stadium National Lia Manoliu from Bucharest, for the launch of MTV Romania.

Enrique Iglesias in 2008.
Again in Spanish, Quizás (maybe) is an introspective album, about the relationship between Enrique and his father.

It debuted at Billboard's 12th place, the highest-placed Spanish-language album, selling one million copies in one week.

All three singles reached good positions in the Latin American charts, signing the sixteenth "first position" for Enrique. Para que la vida got a million hits on US radio.

Quizás was also the first Spanish-language video to enter the MTV Total Request Live show. Iglesias played on The Tonight Show with Jay Leno (first Spanish song on the show). The album was awarded the Latin Grammy as Best Pop Vocal Album.

In 2003 Iglesias released his seventh album 7, with the songs Roamer (written together with his guitarist Tony Bruno) and Be Yourself (a criticism of the lack of trust received from his father). Addicted and a remix of Not in Love with Kelis were released as singles.

Insomniac is the eighth and fourth album in English, and was released in 2007.

It contains his first collaboration with a rapper, Lil Wayne in the song Push, in fact this album is different from the previous one as it incorporates a more pop and rhythm and blues style.

Enrique stated in some interviews that he chose the name of this album because it was completely written at night, and said that the songs selected for the latter come from a list of more than sixty tracks, of which he selected those that for he were of higher quality.

The album contains the reinterpretation Tired of Being Sorry by Ringside of which a single version is also sung with the French singer Nâdiya, while the song Miss You is dedicated to his girlfriend Anna Kurnikova.

The song Ring My Bells together with Enrique are the protagonists of the commercial of a perfume by “Tommy”. This latest album was highly acclaimed by critics, bringing fame back to the singer after 3 years of absence from the music scene.

It is a collection of his best Spanish songs, it was released on March 25, 2008 and includes nineteen songs, two of which are unreleased, Donde estan corazon and Lloro por ti. It is the eleventh album (and the third greatest hits).

Enrique Iglesias's Greatest Hits is released on November 17, 2008, a collection of his most famous songs and duets that have become popular over the years as well as a couple of unreleased songs. According to the first rumors, in the tracklist of the disc there will be "Hero" and "Bailamos" and there will be collaborations with Kelis and Whitney Houston. Enrique's song Can You Hear Me was chosen as the official Euro 2008 song. He performed the song live on 29 June 2008, in the Austrian final in Vienna. The song is later also included in the Insomniac album.

In January 2010, Iglesias participated in the song It Must Be Love, created to raise funds for the victims of the 2010 Haiti earthquake.

For the same purpose he also participated in We Are the World 25 for Haiti in February.

In July, his first bilingual album was released, entitled Euphoria, made half in English and half in Spanish.

This is his first album released by Universal Republic. The first single, Cuando me enamoro featuring Juan Luis Guerra, was released on April 26, 2010.

This was followed by I Like It featuring Pitbull, released on May 3, 2010 in the United States.

The third single is Heartbeat, followed by No me digas que no and Tonight (I'm Fuckin 'You) with the collaborations of Nicole Scherzinger, Ludacris and many others.

With Usher and Lil Wayne he released the single Dirty Dancer and later in 2011 I Like How It Feels with his friend Pitbull and Wav.S. Both singles are part of Euphoria Reloaded.

Universal Republic Records has announced the release of Enrique's new album. "Turn the night up" was the first song of this project, released in August 2013. Later Iglesias presented the single "Loco" (with Romeo Santos, with this song he got the first post in the charts in several countries such as Spain.)

At the end of 2013, the singer presented his second single in English "Heart attack" and immediately after the single "El perdedor" in two versions: pop and bachata.

At the beginning of 2014 Enrique Iglesias presents the new song “I'm a freak” (with Pitbull). Singer Kylie Minogue will also participate in the new album with the song "Beautiful".

This album contains two collaborations with the rapper Pitbull.

Ten days later, the single Bailando is extracted from the album which will be a huge success in the charts all over the world. Canadian singer Mia Martina appears as a dancer in the single's video clip.

On July 17, 2015, One, his first Greatest Hits totally in Spanish language, was released, preceded by the single Noche Y De Dia. With the participation of Yandel and Juan Magán.

Duele El Corazon
On April 19, 2016 the single Duele el corazón was released with the participation of rapper Wisin.

Súbeme the radio
The following year, on February 24, 2017 the new single Súbeme la radio was released.

El baño
In January 2018 he released the single El baño, which saw the participation of the Puerto Rican singer Bad Bunny.

Move to Miami
In May 2018 he released the single Move to Miami, which featured singer Pitbull.