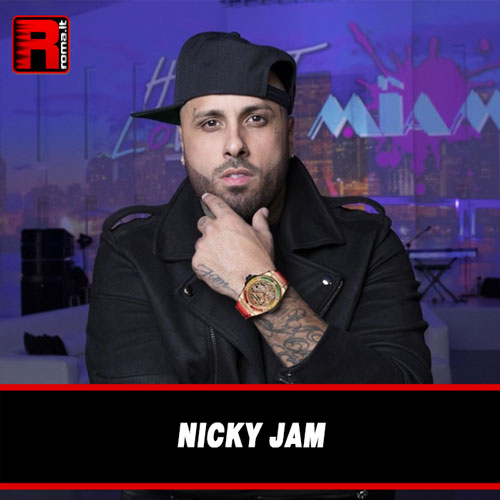 Who is Nicky Jam ?

From a very young age he began to rap and, performing in a supermarket, he attracted the attention of a lady, whose husband was the executive director of a record label. Nicky signed a contract for a recording and, at the age of eleven, launched her debut album.

The life of Nicky Jam

In the mid-1990s he met Daddy Yankee, with whom he formed a duo, called Los Cangris.

Together they created various musical hits, but in 2004 they broke up due to several personal conflicts.

At the end of the decade of the 2000s Jam's musical career suffered a decline, so he decided to move to Medellín (Colombia) between 2007 and 2010, with the intention of relaunching his artistic career. Sony Music

In 2014 Nicky began to gain popularity again in various Latin American countries with her singles Travesuras is Voy to beber.

In 2015, together with Enrique Iglesias, threw the song El perdón, which became a hit in America and various European countries such as Spain, Germany, France, Portugal and Switzerland, among others.

El perdón won, respectively, the award for best urban interpretation in the 2015 Latinos Grammy Awards and the awards for single of the year and favorite collaboration in the Latin American Music Awards.

Individuals El perdón, Travesuras and El lover they were the most successful in Italy, reaching position number 1 and position number 45 respectively in the FIMI rankings.

1981-1994: childhood and early career
Nicky was born on March 17, 1981 in the city of Boston in Massachusetts, United States. Of Puerto Rican ancestry on his father's side and Dominican on his mother's side, Nicky Jam is married and has four children named Joe Martin, Luciana (Lucy), Yarimar and Alyssa, the eldest.

As a child he began to rap; when he was ten, his father decided to move his family to a place in Puerto Rico called Cataño, and Nicky to help his family financially, started working in a supermarket as a packager.

At eleven, he drew the attention of the wife of the executive director of an independent Puerto Rico record label while performing on the job.

The woman took him to her husband; Nicky sang for the conductor who was delighted.
A recording contract was signed and the record company put their debut EP, Distinto a los demás, up for sale, which mixes the rap and reggae genres.

The record was unsuccessful, however, it helped get various disc jockeys and vocalists interested in working with him after listening to his bilingual interpretations, and Nicky on several occasions served as a shoulder at concerts.
His nickname of Nicky Jam, a passer-by in joking form gave it to him.

1995-2009: alliance with Daddy Yankee and musical failure
In the mid-nineties, Nicky Jam had a meeting with Daddy Yankee, an artist for whom, at the time, he felt a lot of admiration.
Yankee appreciated the talent in him and offered him to work together, inviting him as his hype man for a concert he performed in the Dominican Republic.
They formed a duo called Los Cangris and created a strong friendship.

Together they composed and recorded various songs, including En la cama and Guayando, which had moderate success in Latin America.
In March 2001 Yankee released a collection album called El Cartel II, which included a song in which Jam participated as a vocalist, Tu cuerpo en la cama.

"A lot of fame came to me at an early age and I didn't know how to take advantage of it ... a lot of irresponsibility"

(Nicky Jam in an interview with the journalist Mauricio Castro, of La red.)
After the success with Yankee, Nicky Jam began to use drugs and alcohol; Yankee, worried about Nicky's bad habits, tried to help him; but to no avail. They constantly had fights; Nicky composed a song for Yankee and created a rivalry.

In 2004 they broke their friendship for good and stopped working together.
In late November 2004, Nicky's album Vida escante was released, and became the artist's most successful album to date, ranking 4th on Billboard's Top Tropical Albums and 23rd on Billboard's Top Latin Albums.

The album includes well-known songs such as Me estoy muriendo, Me voy pa 'party, No soy tu marido and Chambonea which gained favorable positions in the Latin Tropical Airplay.
In 2004 Yankee gained popularity as a reggaeton artist with his international hit Gasolina; while Jam, with the public failures, continued to self-destruct and stopped recording after falling into a deep depression, which also caused him to gain weight.

He didn't even have the money to pay for the hospital and, with a low profile, he performed in a tourist hotel, which helped him improve his musical skills and found that, aside from rapping, he "could sing."

At the end of December 2007 Nicky released the album The Black Carpet, which had moderate success as it entered the 24th position of the Top Latin Albums of the United States.
For his promotion he put on sale the single Gas pela, with RKM, and it was placed at 45th place on the Hot Latin Songs chart.
Towards the end of the decade of the 2000s, Jam continued with his work in the music industry, but without success.

2010-2014: move to Medellín and return to the music industry
Looking for work and with the desire to start his musical career again, Jam between 2007 and 2010 traveled to the Colombian city of Medellín.
He began to make shows in various cities of Colombia and, counting on the good reception of the public, he thought he could restart his artistic career.
Jam focused on creating a new fan base and began raising the money he made from his concerts to pay for the production of his songs and videos.

In 2012 Jam recorded with Yankee the song El party me llama, included on the Prestige album, which confirmed that both had resolved their disagreements of previous years.

In 2013 Jam released Voy a beber, which became a hit in various Latin American countries and entered favorable positions on the Billboard charts.
In late January 2014, Jam released the single Travesuras, which peaked at # 4 on Billboard's Hot Latin Songs chart.

2015: international success with El perdón
In early February 2015 Jam signed a recording contract with Sony Music Latin and SESAC Latina, and released the single El perdón, which counts on the vocal participation of Enrique Iglesias.
Initially, El perdón was a solo song, but after Iglesias talked to him and showed his interest in collaborating, Jam agreed to re-record the song as a duet.
El perdón became a hit on various popularity charts by entering number one on the singles charts of Spain, France, the Netherlands, Portugal and Switzerland.
Likewise, he took second place in Belgium and Bulgaria, fourth in Sweden, eighth in Germany and ninth in Austria, respectively.
In the United States it came in 65th on the Billboard Hot 100 and 82nd on the Canadian Hot 100 in Canada.
El perdón, with more than thirty weeks in 1st position on Billboard's Hot Latin Songs, became the second song with more weeks in this position, behind only Iglesias' Bailando which lasted forty-two weeks.
An English version titled Forgiveness took place in the 56th position on the Billboard Hot 100 and 30th on the Pop Songs.
Billboard magazine named El perdón as the twelfth "best song of the year 2015".

In the 2015 Latinos Grammy Awards he won the Best Urban Interpretation award for El perdón and was nominated for the Best Urban Music Album by Greatest Hits Vol 1.
On the other hand, in them he won the Single of the Year, Favorite Collaboration and Favorite Streaming Song awards for El perdón, while Jam won the nominations for Artist of the Year and Favorite Urban Male Artist.